When it comes to purchasing parts for your rifles, would you rather have something that was made fast and sold for cheap or something that had a substantial amount of time put into it in order to assure that it’s of the highest quality? Hopefully, you said the second option, because every shooting enthusiast knows that their rifles require the top-of-the-line in maximum performance and stability. That’s why we’ve partnered with American Precision Arms; we know you deserve the best in the business.

American Precision Arms emphasize quality over everything else, because they want to make sure you have the best product in your hands and that nothing has been neglected. What started as president and gunsmith Jared Joplin working alone in his shop has become a sprawling organization filled with several passionate employees that work hard to make the best firearm parts possible.

True to its roots, APA also provides a variety of gunsmith services for several custom rifle jobs. These include, but aren’t limited to, general disassembly and assembly of your rifle, action truing, barrel, brake, and bolt knob installation, trigger jobs, and rifle painting.

Rifle Parts for Any Caliber

APA has a wide selection of components and hardware that can work with almost any rifle. Their trademark muzzle brakes come in 3 different varieties: Micro Bastard, Little Bastard, and Fat Bastard. Each brake has been widely praised for effective performance, even making frequent appearances at tactical competitions. APA also makes the patented Tru-Loc scope rings, which are built to the highest standard in the market with the ability to return to zero after you remove them from your rifle. These scope rings are purposely made to match any other ring of its size perfectly with clearly marked height choice measurements, taking the guessing out of size selection.

Emphasizing how much they care about their customer’s rifle performance and usability, they’ve created a redesigned trigger guard that’s one of the best money can buy. Coming in the LA and SA DBM varieties (long action and short action detachable box magazine), along with the long action CIP length size, American Precision Arms has created a bottom metal trigger guard that won’t get caught on your clothes and throw off your aim. They’ve also designed a variety of hardware for your rifle, including tactical studs, tactical bolt knobs, and bolt handle adapters. Their bolt knobs are designed to give you better leverage on the bolt handle while still maintaining a small size, allowing you to be able to run a bolt faster. They’ve designed their tactical studs to be maintenance free and stay in your stock, unlike many tactical studs on the market that may rip out easily.

If you think their selection and craftsmanship is already impressive, just wait to hear about what’s in store next. American Precision Arms have recently announced that they’re developing a new Generation 3 Little Bastard muzzle break with several new features. The new muzzle brake will include URP tunable top ports for minimal crosshair movement, a new nut design with zero runout and zero over-rotation, and an additional port for increased recoil reduction.

Whether they need muzzle brakes, scope rings, or trigger guards, anyone who needs parts for their rifle can find the American Precision Arms products they’re looking for on OTM Tactical. We’re dedicated to providing you with the best quality firearm parts, which is why we’re proud to stock products made by the incredible gunsmiths from APA. Check out our inventory today to see the wide range of APA products that we have in stock for your rifles. 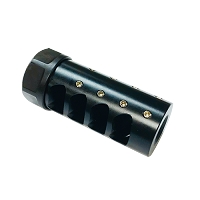