How to Effectively Use a Rifle Bipod 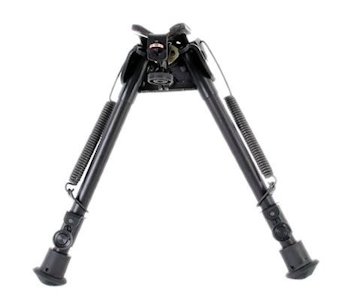 The purpose of a rifle bipod is pretty obvious: it provides a means of stabilizing your rifle at a certain height in order to shoot more accurately with less fatigue. But you can't just attach a bipod to your rifle and expect it to make you a better marksman. For one thing, you'll need to know how to use your bipod effectively, otherwise it won't help you much and in fact, could even hinder you.

So what do you need to do to get the most out of your bipod and really feel the difference?

First things first, it matters what bipod you buy. You have to consider the height of the bipod compared to a few factors, like your preferred shooting position and whether you'll need to adjust for things like terrain or vegetation. This is why an adjustable bipod is always best — you can raise or lower by several inches if you have to, and if your bipod comes from a reputable manufacturer like Harris or Atlas, you can rely on these adjustments to remain solid even under repositioning, recoil, or other stress. In other words, one leg isn't going to suddenly choke up and throw your aim off.

Never use a bipod that isn't adjustable. These exist, primarily to attract marksman with a low budget that don't know what they'll be missing, but attempting to use one in any situation that doesn't call for the bipod's exact built-in height is only going to lead to frustration. You'll probably find yourself "fighting" the bipod if it's too high or low, and your accuracy will suffer — as well as your muscles from being forced to hold an uncomfortable position.

OTM Tactical has only the best rifle bipods and accessories, and at low prices, so it's a good place to start your shopping.

If you set up your shooting position on hard ground, your rifle will slide toward you with its recoil. You need the friction of softer ground to help hold the bipod's feet in place. You can install Hawk Talons for Harris Bipods and for Atlas Bipods for additional surface grip.

If you scrape out a small trench in the ground, you'll reach softer dirt for your bipod's legs to grip. This also has the bonus of providing a small edge in the dirt that helps stabilize the bipod. While you should always set up for comfort, the shorter you can set the bipod's legs the more consistent your accuracy will be. Remember to keep your shooting grip consistent, and lean slightly into the bipod to help absorb recoil that could mess with your positioning.

If you have a good bipod, it's not difficult at all to learn how to use it as long as you grasp the basics of how to set it up and position yourself. Just like everything else in the world of precision shooting, practice makes perfect.

Need help selecting a bipod or have any other shooting questions? Contact OTM Tactical and we'll help!