The History of the Firearm: Rifles and Shotguns 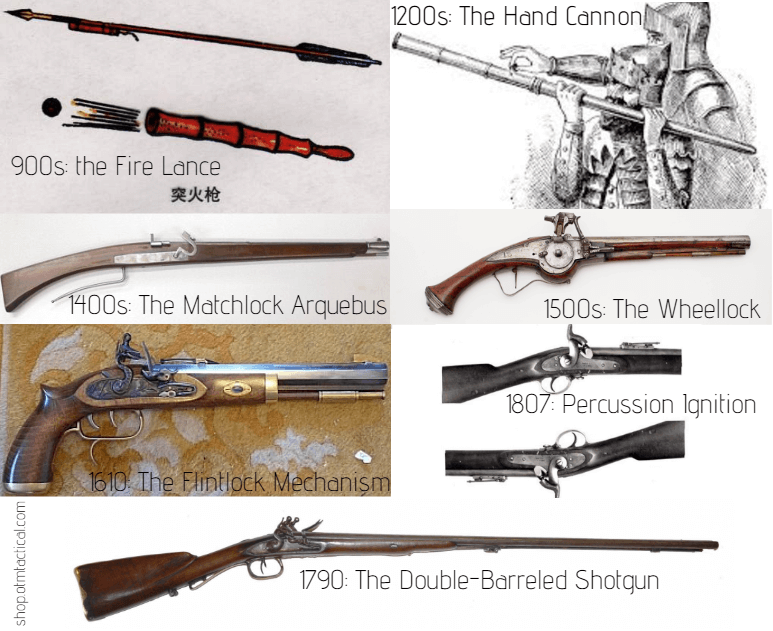 The History of the Firearm: Rifles and Shotguns

The gun is up there with the wheel and the alphabet as an invention that has had an incalculable impact on the world. We cannot imagine a world in which they never existed. However, there was a point in time when everything we take for granted now — basic mechanisms, triggers, even gunpowder — had not yet been created. Here is a condensed history of the firearm, with an emphasis on rifles and shotguns.

Shortly after the turn of the previous millennium, the Song dynasty of Han China became the first civilization to develop weapons that we might recognize as firearms. The fire lance consisted of a bamboo tube that contained gunpowder, which was set off with the lighting of a fuse and unleashing a burst of flame. Sometimes, projectiles like rocks and pottery shards would be placed inside so they could be launched by the blast. Eventually, the lance part was dropped and the bamboo was replaced with a metal barrel.

The first-hand cannons were created in modern-day China and spread to Europe, the Middle East, and India — either through the Silk Road or the Mongol invasions. These devices worked by placing a lit match against a “touch-hole” that would ignite the gunpowder within. They functioned best with two people: one to hold and point the cannon, the other to set it off. Despite their cumbersomeness and their low range, they quickly became popular, especially across Europe.

The next great innovation in firearms technology settled the problem of the touch-hole. The matchlock mechanism — first used in later models of the arquebus long gun — kept a lit match inside the weapon and the gunpowder in a flash pan. The match initially dropped and set off the powder with the pull of a lever, which was later replaced by the first gun trigger. Shooters could keep both hands on the weapon, and firing became more convenient. However, the need to keep the match lit made the matchlock gun difficult to use in warm weather and highly visible in darkness.

Before 1498, all guns were smoothbore, meaning their barrels lacked any grooves on the inside. This made for random distance ranges and low accuracy. German gun makers, taking inspiration from established practices for making arrows fly faster, cut helical grooves to straighten the bullets’ direction when fired. The practice, known as rifling, vastly improved distance and accuracy, and the rest is history.

The wheellock mechanism, believed by many to originate in Germany, was the first firearm to ignite on its own. When the operator pulled the trigger, a spring-loaded metal wheel would scrape against a different metal to create sparks. When the cover for the flash pan was open, the sparks would ignite the exposed gunpowder. People were finally capable of operating a gun with one hand.

In the past, before a gun could be fired, its flash pan needed to be opened by hand. Otherwise, the gunpowder would not be exposed. However, when someone pulled the trigger on a gun with a flintlock mechanism, the action would mechanically release the cover while simultaneously generating sparks. This reduced the number of steps needed to prepare a firearm.

Shotguns have existed since the 1600s, albeit under many names, including the blunderbuss, the scattergun, and the fowling piece. The Germans created them, the British used them to hunt game birds, and the Americans wielded them against Native Americans in the “Wild West.” The most important development in the weapon’s history may be the double-barreled shotgun — not so much for its invention, but rather for the developments that followed, such as breechloading and pumps. These innovations made the shotgun into a national institution.

Patented by Rev. Alexander Forsyth of Scotland, this method of ignition relied on the release of the then-recently-discovered powder called fulminate. Upon loading the gun, some fulminate would empty from a magazine into a pan. Upon pulling the trigger, a hammer would hit a metal cap, releasing a different kind of fulminate that would create sparks for the powder charge. Percussion ignition, which protects powder and improves firing speed, is still used for many rifles.

Ferdinand Ritter von Mannlicher of Austria is credited with inventing the first successful semi-automatic rifle. The earliest ones used the blowback system to eject spent cartridges and pop in new ones for the next round of shooting. Modern semi-automatics use gas-operation, a practice that started with the M1 Garand in 1937.

Military forces around the world have been using the high-powered, fully-automatic weapons known as assault rifles since World War II. Nazi Germany first developed the Sturmgewehr 44, whose name translates to “assault rifle.” The Soviet military, impressed with the gun’s power, responded by designing the AK-47 and distributing it to their soldiers and allies. Not to be outdone in the Cold War, the United States created their own assault rifles as well. The M16, first used in the Vietnam War, remains a key tool for the American military today.

While the history of the firearm spans far longer and wider than the developments mentioned here, this list of descriptions could serve as a sort of “top ten” for the timeline of rifles and shotguns. Without these innovations, the gun as we know it would not exist today. Naturally, the story of firearms is not over yet, and those who study both the weapon and its history may someday write the next chapter.