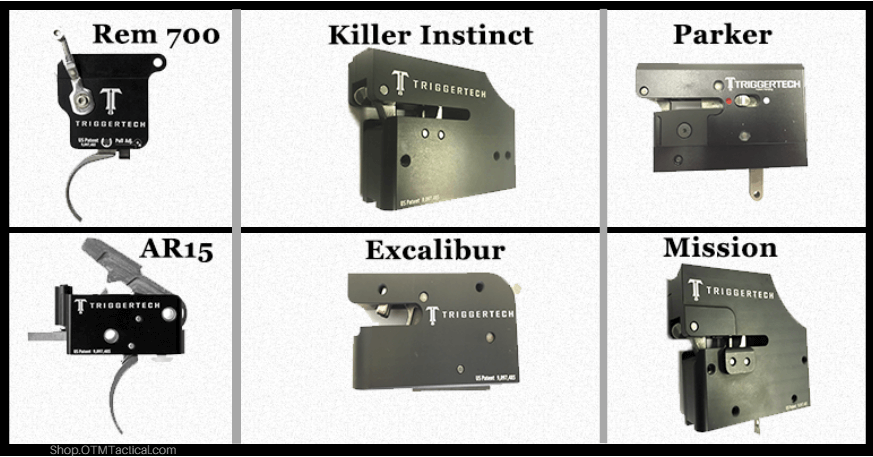 How do you make precision shooting better? At OTM Tactical, that’s a question we’re extremely interested in, and we feel all serious marksmen will agree — after all, whether you’re a hunter, target shooter, or into tactical competition, you’re always seeking an advantage. And while there’s no substitute for skill and practice, there’s a good reason so many competitive shooters seek to upgrade their rifle piece by piece. A new barrel, a new stock, and other parts can all make a difference in your rifle’s performance — and, naturally, so can a new trigger.

We carry only the best aftermarket rifle upgrades here at OTM Tactical, and we’re proud to include TriggerTech triggers in our catalog. Read on and you’ll see why.

TriggerTech has taken a scientific approach to trigger construction, which has resulted in their development of Friction Release Technology (FRT). FRT works through the application of TriggerTech’s patented free-floating roller system, which provides the cleanest trigger pull we’ve ever seen. The break is extremely crisp and trigger creep is nonexistent. This is because TriggerTech’s FRT operates without sliding friction, distinguishing TriggerTech from all other triggers on the market.

The resulting shots are incredibly smooth, which greatly assists in precision and accuracy of subsequent shots. These triggers have minimal overtravel and a short, but good tactile reset thanks to TriggerTech’s innovative technology. The pull weight is also easy to adjust through an externally-accessible screw.

Several options are available to make TriggerTech accessible for a variety of shooters, including left- and right-handed versions. A bolt release is also optional.

OTM Tactical is proud to carry TriggerTech triggers for the AR as well as the precision shooter’s favorite, the Remington 700 footprint. As a premier supplier of high-performance precision rifle upgrades, we’re able to offer excellent prices on these unparalleled triggers. Try one and you’ll see why so many competitive shooters feel TriggerTech is the best trigger they’ve ever pulled.

If you have pre-purchase questions or you just want more details, feel free to contact the precision shooting experts here at OTM Tactical. We’ll be happy to help you out.